Why Your Call To Action Copy Isn’t Converting

How often have you started filling out an online form and then stopped?

You were ready to click the buy button… then suddenly decided not to?

You’re not alone. It happens too often. Website users routinely abandon what they’re doing at the most critical moment – namely taking action exactly when it counts most…

Because the copy needed to reduce whatever friction the user is feeling that’s getting in the way of him taking action isn’t there.

When we’re talking about interactions with your website, friction isn’t generally a good thing. Friction means anything that’s making it more difficult for your users to get things done on your site.

Typical things that cause friction are:

Add to that list any of the small bits of copy – otherwise known as microcopy – within and surrounding your calls to action that don’t help your visitor accomplish what he wants.

Instead of lighting a fire under your visitors’ backsides to buy those sweet new pair of boots or opt into an uber informative autoresponder series, the copy is leaving them cold.

Write your call to action copy with your visitor in mind

This may seem obvious but it’s not being done on the vast majority of websites.

Michael Aagaard, a CRO copywriter who has made it his mission to test button copy, has come to the conclusion that you need to be asking yourself these 2 questions before you can optimize your calls to action:

The answers to these questions will give you the direction you need not only to create more effective copy for your buttons but for all the copy in and around your various calls to action.

You’ve got the questions to ask… but, now what?

Let’s take a look at 3 different areas around your calls to action that can create friction and some ways to deal with them.
1) Hesitations and objections

There are several things that can cause people to hesitate when they are ready to trip that trigger. These include such things as:

Getting people beyond these hesitations generally requires either some reassurance or language that keys into how the call to action is relevant to them. Joanna at Copyhackers calls these “click triggers.”

In a test she did for Friendbuy.com, she created 3 variations of copy around the free trial sign up button. The control version had no click trigger copy surrounding it. The first variation included a brief testimonial, while the second had 2 bullets designed to stomp out any objections.

The above variation beat the control by 34%. Letting people know that they did not have to enter a credit card in order to start their trial significantly helped to reduce the barrier to entry.

Giving a reason if you want more information

Most people hate filling out forms and resent giving away any more information about themselves than they have to. In a 2012 benchmark study by the Baymard Institute, the researchers found that every single subject during the checkout usability test complained about a website that asked for too much personal information.

However, for those websites that gave a clear reason for wanting something like a phone number – test subjects were far more willing to provide the information.

The big takeaway here is that an explanation can go a long way to reduce anxiety when it comes to filling in forms. Make it clear why you need the information and what it will be used for without making people hunt for it.

Giving people a reason to click a button or fill in a form is one way of alleviating friction. Another is to let them know the benefit or value behind taking action. 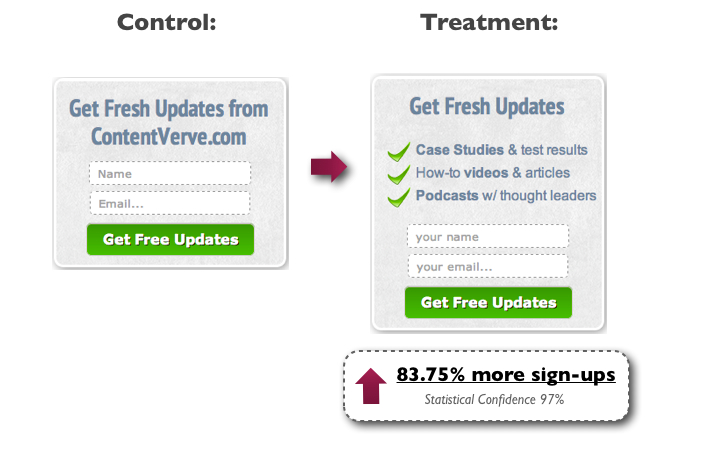 In this test by Michael Aagaard, he increased the amount of sign ups to his email list by 83.75% simply by telling people what they would get after giving their emails.

How many times have you thought about signing up for an email list only to wonder if you’re really going to get anything you actually want after doing it?

Apparently, quite a few people wonder the same thing. By being explicit about what your visitors can expect from signing up, chances are they will be more likely to do so.

Make the experience all about your visitors. That seems to be a key finding with so many of the websites I work on and the tests conclusions I see.

In a test on a landing page, Michael Aagaard and the folks at Unbounce found that by changing the button copy from 3rd person to 1st person they were able to increase the click through rate by 90%. 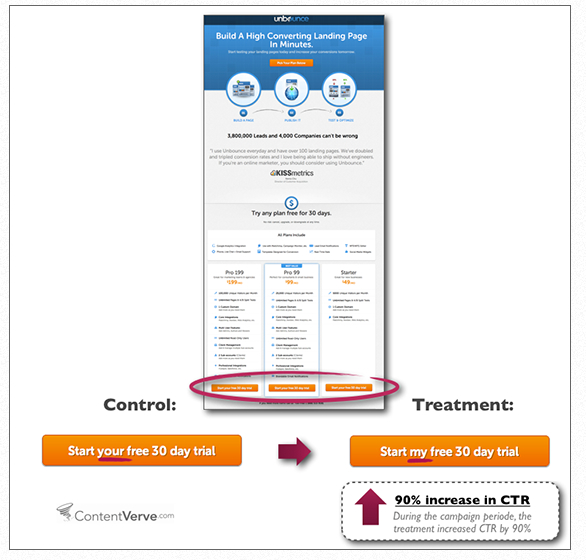 Is it because people feel as though subconsciously they have more control over the decision making process when the action is posed in the 1st person?

Or, does it suddenly make it all about them? – appealing to the very human desire to feel important. 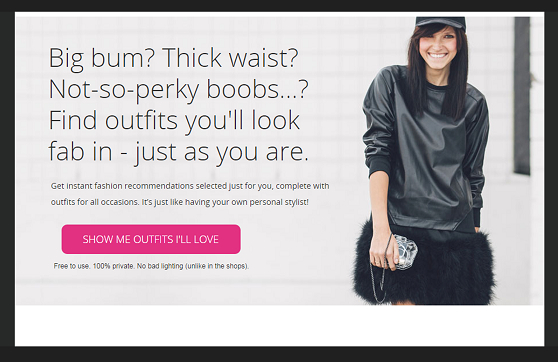 You can read more about this test on Copyhackers.

Take a look at the above treatment. This is part of a test I worked on with Joanna at Copyhackers. We initially only changed the headline to the above and kept the original button copy that read “Sign up now.”

While the first variation trended up, we were only seeing a marginal lift.

Once we added the new button copy – placed in the 1st person and showing people a real benefit attached to clicking (who doesn’t want to see outfits they’ll love?) – conversions skyrocketed to nearly 124%.

Whatever the reason, more people felt inspired to hit that button with the tweaked copy.

And the moral of the story is…

The words you choose in and around your calls to action can make a huge difference.

Take all of these examples as a place to start not end when it comes to your own copy. What works on one site won’t necessarily work on another.

Go back to those questions I referenced above. Then, apply them to your site’s calls to action. You’ll want to consider any customer research you’ve done. It’s there that you’ll find the answers to those questions.

So you can start making some well thought out changes to test.

Has this inspired you to take another look at your website’s copy?

Get Finding The Right Message on Amazon 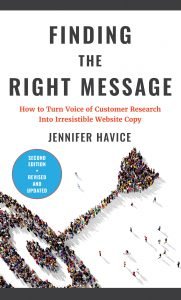 “What Jen Havice explains in this short book is nothing less than a degree in message mining—what messages you need to share, what words to use, and how to find them. It’s an easy read that packs a major marketing punch.”

We use cookies on our website to give you the most relevant experience by remembering your preferences and repeat visits. By clicking “Accept”, you consent to the use of ALL the cookies.
In case of sale of your personal information, you may opt out by using the link Do not sell my personal information.
Cookie settingsACCEPT
Manage consent

This website uses cookies to improve your experience while you navigate through the website. Out of these cookies, the cookies that are categorized as necessary are stored on your browser as they are essential for the working of basic functionalities of the website. We also use third-party cookies that help us analyze and understand how you use this website. These cookies will be stored in your browser only with your consent. You also have the option to opt-out of these cookies. But opting out of some of these cookies may have an effect on your browsing experience.
Necessary Always Enabled
Necessary cookies are absolutely essential for the website to function properly. These cookies ensure basic functionalities and security features of the website, anonymously.
Functional
Functional cookies help to perform certain functionalities like sharing the content of the website on social media platforms, collect feedbacks, and other third-party features.
Performance
Performance cookies are used to understand and analyze the key performance indexes of the website which helps in delivering a better user experience for the visitors.
Analytics
Analytical cookies are used to understand how visitors interact with the website. These cookies help provide information on metrics the number of visitors, bounce rate, traffic source, etc.
Advertisement
Advertisement cookies are used to provide visitors with relevant ads and marketing campaigns. These cookies track visitors across websites and collect information to provide customized ads.
Others
Other uncategorized cookies are those that are being analyzed and have not been classified into a category as yet.
Save & Accept